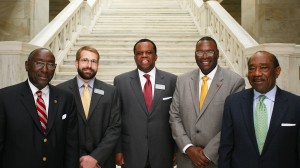 “Dominik’s financial acumen, strategic thinking and commitment to our mission as CDFIs (Community Development Financial Institutions) are the right mix at the right time,” said Williams. “Since joining Southern, I’ve been on a mission to sustainably amplify our impact through the use of innovative financial tools that help rural Americans find new economic opportunity and build personal financial strength. Dominik has been critically important in that effort.”

SBCP’s current CEO, Tanya Wright, who successfully led the organization through a period of transition, will continue with the Southern organization in a newly created executive role.  “Tanya’s new position is equally crucial to Southern’s continued growth,” said Williams. “She will be responsible for managing the implementation of new products and services aimed at banking the unbanked and underbanked.”

Mjartan, who joined Southern in 2006, has most recently served as Senior Vice President, charged with managing corporate strategy and other corporate functions. He will retain these responsibilities by serving as Executive Vice President of Southern’s holding company. As a member of the senior management team, Mjartan has helped lead Southern through a period of rapid growth in both size and impact during a time when many financial institutions were scaling back.

“For nearly a decade, Dominik has been at the forefront of Southern’s work to create innovative programs and assemble capital,” said Herman Davenport, Southern Bancorp Community Partners Board Chairman. “He is both driven and passionate about our work, and we are pleased to have him at the helm.”

Mjartan came to the U.S. from the former Czechoslovakia at the age of 16 with hopes of earning the American Dream, a dream he now strives to make attainable for some of the most disadvantaged people in America.  He is married to Georgia Mjartan, Executive Director of Our House, Inc., and they are currently the foster parents of two young children.  (Click here to view recent news coverage of Dominik’s early life and work.)

“Increasingly, the American Dream is out of reach for hard working people,” said Mjartan. “CDFIs like Southern are uniquely equipped to bring capital and financial development services into communities and ensure that capitalism works for everyone. This powerful combination of mission and margin has helped drive opportunity in places deemed irreversibly distressed by others.  We believe that we can build on this track record in rural America to create more economic opportunities, revitalize neighborhoods, and improve family economic security.”

Southern Bancorp, Inc., a bank holding company; Southern Bancorp Community Partners, a development finance and lending organization; and Southern Bancorp Bank, one of America’s largest rural development banks were founded in 1986 by then Governor Bill Clinton, Walmart Chair Rob Walton, the Winthrop Rockefeller Foundation and others who were concerned about the economic decline of rural Arkansas. All three entities are U.S. Treasury certified Community Development Financial Institutions (CDFIs) collectively known as “Southern.” With $1.1 billion in assets, 80,000 customers at its 39 branches in Arkansas and Mississippi, Southern invests in people and businesses in rural communities; empowers them to improve their lives; and helps them transform their communities.  On the web at banksouthern.com & southernpartners.org.