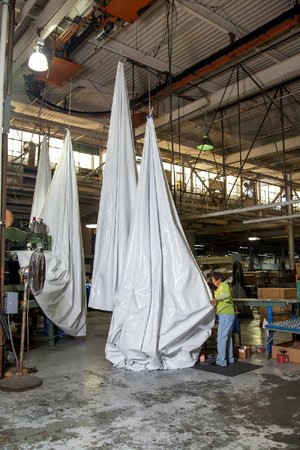 Work is nearing an end on the largest construction project in Helena-West Helena in more than 40 years. Enviro Tech Chemical Services Inc. of Modesto, Calif., is building an $8 million, 110,000-square-foot building at the Helena Harbor.

Enviro Tech, which will hire more than 40 employees initially, produces liquid disinfectants for the food industry to sanitize equipment. It should open later this year, said Brian Krigbaum, the plant’s general manager.

The city also is becoming a year-round tourist attraction. The primary reason is the development of four sites honoring Civil War battlefields in the city. Last year, the battlefields attracted 29,000 tourists, 11,000 more than in 2013. This is on top of about 60,000 people who cram into Helena-West Helena every October for the King Biscuit Blues Festival.

Southern Bancorp, a community development bank based in Arkadelphia, has loaned about $14 million to fund renovations and new construction on 17 properties in downtown Helena-West Helena over the past 10 years. About $2 million of that has been loaned in the past two years.

“It’s hard to keep up with all the stuff that’s going on,” said Dominik Mjartan, executive vice president of Southern Bancorp.

The reason for all the changes is to create a “multipronged economic development strategy,” Mjartan said.

Southern Bancorp, which has three branches in Helena-West Helena, hasn’t provided the funds for all construction.

One group of investors borrowed $100,000 to renovate a decaying apartment building into six modern apartments in a downtown alley, said Vida Fielder, a lender with Southern Bancorp. Before the renovations, the apartments were renting for $65 a month and now rent for $395 a month.

Matt Inman, who grew up in a well-established family in Helena-West Helena, has renovated a 5,600-square-foot, two-story building on Cherry Street downtown. The top floor is a condo for Inman, and he hopes to lease the first floor to a retail store or a restaurant.

Inman’s decision to renovate the building was motivation for others to follow his example, Mjartan said.

“The morale in Helena is getting better,” Inman said. “It’s not as dark and gloomy as it was five or six years ago.”

Last summer, work was completed on several sites memorializing the Civil War battle for control of Helena, which was fought July 4, 1863.

Fort Curtis is a three-fourth size replica of one location of the battle, along with Battery C, which sits above Fort Curtis on the southern tip of Crowley’s Ridge.

Freedom Park commemorates the underground railroad that slaves took to Helena and on to freedom in Union territories. When the Union Army marched through Arkansas to Helena, thousands of slaves followed them.

Esteban Hall, a 19th-century home, is being renovated into a tourist center for the Civil War sites.

The company began work in 2008, developed the concept, did the research and wrote text for the signs at the sites, said Joe Brent, who owns the company with his wife, Maria.

“Helena hasn’t even actually started marketing this in a serious way,” Brent said. “Being between Memphis and Vicksburg [Miss.], Helena is in a good position to catch Civil War buffs. Helena needs the help, and this is one of the things they want to do. We’re starting to work with them, too, on some blues-related stuff.”

“If we can just peel off 10 percent of that we’ll have enough tourists, and it looks like we’ll be able to do that,” Mjartan said.

Another tourist attraction being promoted is ecotourism, such as bird watching and navigating the Mississippi River.

“Our mission is to share the great beauty of the Mississippi River,” Ruskey said. “There are only a handful of people who venture over the levees and do anything in the river. We take people who are seeking wilderness-type experiences right here in the gut of America.”

Quapaw Canoe has taken thousands of people on trips down the river since it started in 1998 in Clarksdale and in 2008 in Helena, Ruskey said.

If the customer wants it, Quapaw Canoe can take travelers as far as the Gulf of Mexico, said John Fewkes, who manages the Helena office.

When Southern Bancorp began the revitalization of Helena-West Helena in 2003, statistically the city and Phillips County were in poor condition.

In most categories, Phillips County still lags the state, but some improvement is visible, according to statistics researched by Southern Bancorp.

The jobs of 140 workers were saved when Southern Bancorp loaned money to workers at Hoffinger Industries so they could buy out the company’s owners and continue business as Doughboy Pool Co., making Doughboy above-ground pools. Another 44 jobs will be created at the Enviro Tech plant.

In 2005, more than 600 people completed a two-year process of establishing almost 50 primary goals for Helena-West Helena. More than 80 percent of those goals have been accomplished, Mjartan said.

He is motivated to give the people, particularly young people, of Helena-West Helena an opportunity to succeed, Mjartan said.

Mjartan grew up in Communist Czechoslovakia. His parents, who each had master’s degrees, had three children and were always working one or two jobs. His father was an engineer and his mother was a film critic and writer. Yet they made only about $200 a year when Mjartan was young, he said.

“That in itself gave me an example,” Mjartan said. “The advantage I had was I had two parents who both worked. I had a great education and great schools. I could start working at 12, and I got my first paycheck at 13.”

“The reason I came to this country was I believed, which was naive clearly, that regardless what your background is, you can have a decent shot at the American dream,” Mjartan said. “Should your ZIP code really determine whether you have a chance at a decent life?”

If you’re born in some neighborhoods in Helena-West Helena, Mjartan said, “the statistics are so stacked against you that it doesn’t matter what you want to accomplish with your life, you’ve never seen it done. You’re surrounded by multigenerational poverty.”