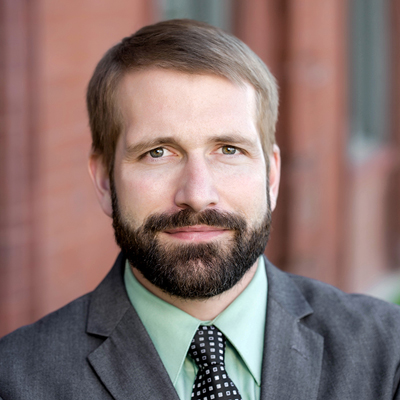 Dom Mjartan went from Czech exchange student to family man with a great job and a white picket fence. He wants all American kids to have such a chance.

“I think I changed three diapers this morning.”

“Having three kids under the age of 2 is a lot of work.”

This is the American dream?

“I came to this country with nothing,” Mjartan said in his office at Southern Bancorp Inc., “and have everything I need, even a house with a white picket fence.

“And I’m grateful for that. But so many kids grow up here and they don’t have the same chance.”

That frustrates and surprises Mjartan (mee-YAR-tan), who immigrated to the United States at 16, an exchange student from Bratislava, Czechoslovakia, who wound up in Camden, Ouachita County, Arkansas.

An important milestone was when his parents, Jozef and Jana, sent him off to America with a plane ticket and $500. They shouldn’t have, he said. They didn’t have that kind of money to spare, living in Communist Czechoslovakia.

Jozef and Jana were educated, thoughtful, spiritual people, Mjartan said. They exposed their children to many different opinions. And Bratislava is close enough to Vienna for Western influence.

“What stood out to me was that for the greatest opportunity to succeed, it was America.”

Mjartan didn’t pick Camden; the exchange program sent him there to live with the Eckert family — Eddy Eckert and Elaine Berg Eckert.

“I was delighted to come to America,” Mjartan said. “They could have sent me anywhere.”

The Eckerts, he said, “confirmed to me the image I had of America. I can’t think of many more people who have done so many good things for others in their lives. Had it not been for them I surely would not be here.”

Most high school students have a place — band, football, chess club. Mjartan’s place at Camden Fairview? “The kids in my PE class called me Forrest Gump” — he was that good at ping-pong.

And like the anti-hero, he was wide-eyed and enthusiastic about every experience. “I had never really met a black person growing up,” Mjartan said. “I had no historical context. They were just kids to me. Everyone was so kind to me. I was never ‘that foreign guy.'”

Here’s another milestone. Mjartan was at Southern Arkansas University Tech when he contacted Earl Ramsey, director of the Donaghey Scholars program at the University of Arkansas at Little Rock.

Donaghey offered more than a rigorous academic program — it was tuition-free and had a stipend, big news for a broke Czech kid from Camden.

“I’m not sure which bucket I was in,” Mjartan said.

Ramsey retired in 2014 after 25 years as Donaghey director. He laughed about the picking and making of winners. “It was picking a winner in his case.”

“He contacted me, wanted to meet me and talk to me,” Ramsey said. “It was in December of 1998. He came up and made a tremendous impression. He was a shoo-in. What about him still shines is this is a guy with a lot of initiative and determination and drive and who is so personable. That all shone through immediately.

“This was clearly somebody we would want.”

Mjartan worked as much as he could at UALR, in computing services and student services. He tutored a blind student from basic algebra through business calculus. But as much as he may have helped others, Mjartan said, he could name numerous people at UALR who helped him. That includes Charles Hathaway, the chancellor at the time, who wrote a letter that helped Mjartan get into graduate school in Ireland.

Along with his UALR bachelor’s degree in business administration, Mjartan took to Ireland his new wife, Georgia. They were classmates in the Donaghey program and hotly competitive, he said. Over the course of their UALR careers there wasn’t a B between them.

There was a difference, he said.

Georgia Mjartan is big in this town. She recently celebrated 10 years as executive director of Our House, an organization that helps get families out of homelessness. She’s also the daughter of Peter Miller, the smiling lawyer on the back of the phone book. “He’s a great guy,” Mjartan said of his father-in-law.

A Donaghey classmate of Mjartan’s, Shirley Schuette of Little Rock, recalls his energy.

“Very hard worker, very diligent, really focused,” she said. “If he had to go from this side of campus to that side of campus, he didn’t walk, he ran.”

“He always wanted to be the best, do the best,” Schuette said. “He definitely wasn’t afraid of hard work.”

As a foreign student, Mjartan “broadened my world, opened it up.”

Schuette was a nontraditional Donaghey scholar, starting the program at 52. She was, she said, something of a mother figure to other students. Her study abroad was in Graz, Austria, from which she traveled to Bratislava to visit Jozef and Jana Mjartan.

“Dom may not have appreciated what it was like for a mother to have a son that young to go off into the world,” she said, “but I identified with that.”

Dominik Mjartan is a capitalist. No reservations.

“That’s why I came to this country. Capitalism is a force for good.”

“In America there is a unique drive to create economic opportunity,” he said. “That’s what appealed to me about America.”

Mjartan is chief executive officer of Southern Bancorp Community Partners and an executive vice president of Southern Bancorp Inc., a holding company for Southern Bancorp Bank. All are certified by the U.S. Treasury as community development financial institutions. Southern’s mission is to create economic opportunity for people in distressed rural places in the South. These are not small cities in the Delta but more like wide spots in the road. In Arkansas, some branches are in Bismarck, Elaine, Eudora, Manila and Marvell. In Mississippi: Indianola, Olive Branch, Friars Point and Lula. The 2010 Census showed Lula with a population of 298 folks. Not many traditional banks do business in towns of 298 folks.

“To us, profit is a secondary focus,” Mjartan said. “That’s not to say it’s subordinate. We see profit as a means to accomplish our mission.”

He said, “Southern makes capitalism work for folks who don’t have access to capitalism.”

Research shows what happens to small businesses when they confront physical distance from branch banks, Mjartan said. “For every mile distant there is a loss of credit opportunity and job creation.”

Mjartan said success should not be determined by ZIP code. Living in Helena-West Helena — a place where Southern is active in economic development — shouldn’t mean people there can’t be upwardly mobile. Net worth is the single greatest predictor of economic mobility, Mjartan said — not education, not income. It takes money to make money, and Southern serves that principle.

“We just financed a $21,000 mortgage to a woman who has worked in the Helena school district for 30 years,” Mjartan said. “She rented and never missed a payment.” A counselor at the bank told her — “You already bought your house.”

“This sweet lady, who has worked every day of her life, now has an asset. There are millions of people like her in America today. Her children and grandchildren will now have an asset. That changes their life’s trajectory.”

This homeowner is a role model to her children and grandchildren, Mjartan said, and has created stability for her family. She’ll also invest in the house, so the local hardware store benefits. And someday she may borrow against the equity to send her grandchildren to college.

He sees this illustration of a rolling investment at his wife’s nonprofit, Our House. It’s more than a shelter, it’s a rebounding.

“My belief in this model is reinforced by our experience with Our House,” Mjartan said. “Working with Georgia, I’m enamored of the whole notion that there’s more to life than making money. Frankly, I was jealous she got to do that. She doesn’t do charitable work — she does transformational work.

“What I love about Southern is it marries financial discipline and the rigor of a financial institution with a purpose. Our founders understood that profit and purpose are not mutually exclusive.”

Donna J. Gambrell of Washington is a believer. She spent a career in government with the Federal Deposit Insurance Corp. and the Treasury’s Community Development Financial Institutions Fund. Working with Southern is “a wonderful experience, primarily because Dom has the commitment, the compassion and the financial savvy. And he has specific goals in mind, working with the loan funds he oversees.”

Those goals, she said, are to “bring people into the financial mainstream and not only create accounts but come into the full-fledged mainstream and use the products and services of the bank to improve their credit scores, buy a home or start a small business.”

Gambrell joined the Southern board in February and it’s the pinnacle of her career — this work with community development banks. “You get to see the impact. When I’m in town, Dom shows me around to see the homes, the small businesses, the manufacturing facilities” financed by Southern. It’s a slow transformation, in Helena-West Helena, for instance, a depleted Mississippi River town where Mjartan spends much of his work time.

He stepped out of Southern’s bank building recently and looked down historic Cherry Street. On his first day in 2006, he said, he saw three cars. On this rainy day there is much more traffic.

Traffic is important, Mjartan said. Some of it comes to the state Revenue Office, which Southern helped to move downtown. “It was the first sign of life coming back to downtown Helena in recent years.”

A walk down Cherry Street yields news about many Southern-supported projects.

“Every block has some investment we’ve made in the past few years.”

One of those projects is the Hotel Cleburne, which Southern bought for $60,000, and subsequently investing $400,000. Now, developers from Austin, Texas, have committed to turning the building back into a hotel and apartments, meeting a need in the city for housing and hotel rooms.

Southern Bancorp makes about $56 million a year in loans in Phillips County, said Nathan Pittman, a spokesman for the bank. In the last three years, Southern invested an additional $3 million focused on job creation and downtown revitalization, resulting in the creation of 45 jobs and the renovation of several historic downtown buildings.

Back to those three children under the age of 2. “Georgia does all the work,” Mjartan said, smiling.

“That’s not true at all,” Georgia said. “He is a person who walks with the heart of a servant. He is so humble.”

Melody is almost 2. She was adopted after the Mjartans fostered her four days after she was born. Melody was especially gratifying to Jozef Mjartan, who got to see a cellphone photo of Melody a few days before he passed away.

“‘I have a feeling this will work out,'” Dominik Mjartan said, quoting his father. “We’re so thankful he got to see, virtually, his first grandchild.”

Next up is a boy, less than a year old, who remains nameless because the Mjartans are still fostering him (angling to adopt), and there are rules about that sort of thing.

Bringing up the rear is Joseph — pronounced Jozef, for his grandfather. Joseph was born to Georgia and Dom in July.

The Mjartan children have the advantage of accomplished parents. Not every child is so lucky, and that drives their father.