The Policy Points report, From Natural Gas to College Degrees: The Arkansas Promise Trust Fund, outlines a plan for leveraging the revenue potential presented by natural gas development of the Fayetteville Shale Play to significantly increase higher education opportunities for Arkansans. The Policy Points can be accessed online at

Data presented in the Policy Points indicates that the first decade of natural gas production in the Fayetteville Shale Play could yield $2.4 billion to $5.6 billion in severance tax revenue if the state severance tax was increased to levels comparable to those of neighboring states. In contrast, such production would yield just $30 million under the state’s current severance tax at recent prices. 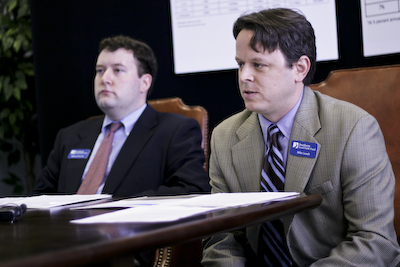 “Under the state’s current severance tax, the Fayetteville Shale Play will be a one-time, depleting resource that will benefit a relatively fortunate few,” said Mike Leach, Director of Southern Good Faith Fund’s Public Policy program. “With very reasonable state policy changes, the Fayetteville Shale Play can be turned into a permanently renewable resource that could benefit every future generation of Arkansans.”

From Natural Gas to College Degrees notes that Arkansas has the nation’s second lowest attainment of both bachelor’s degrees and associate’s degrees, in a knowledge-based economy in which postsecondary education is more vital than ever. The proposed Arkansas Promise Trust Fund would use interest earnings from increased severance tax revenue to, first and foremost, finance a variety of need-based financial aid proposals outlined in the report. A secondary use would be to fund the state’s public colleges and universities to improve student retention and completion. Interest earnings from the Arkansas Promise Trust Fund could generate millions of dollars a year indefinitely.

“The current severance tax structure in Arkansas is an antiquated relic that shortchanges our state,” said report author Michael Rowett, Research and Communications Manager for Southern Good Faith Fund’s Public Policy program. “It’s indefensible that the state collects more than twice as much money from decal fees on vending machines as from the tax levied on the extraction of one of Arkansas’ most valuable natural resources.”

From Natural Gas to College Degrees outlines the following specific proposals, all designed to increase the state’s long-term commitment to need-based financial aid:

Once these priorities are met, and as Arkansas Promise Trust Fund interest revenues continue to build, and depending on the rate of severance tax enacted, the state could eventually begin to guarantee the opportunity for college to all Arkansans. The state could establish an Arkansas Promise scholarship to guarantee every Arkansan with a high school diploma or a GED the opportunity to earn an associate’s degree or even a bachelor’s degree. Such a guarantee would be similar to the El Dorado Promise and Georgia’s HOPE Scholarship.